You are here: Home › Dieselpunk › Interview with Alex White of The Gearheart

After finding my review of his podcast The Gearheart on my blog, Alex White got in touch with me and we had a little email exchange during which he suggested doing an interview I could publish on my blog. Obvioulsy, I jumped on this opportunity and here’s the interview:

Where did you get the idea for The Gearheart from, what inspired you?
Well, as sources of inspiration go, I was really quite into Indiana Jones as a child, and that got me into a lot of pulps. I read reprints of EC comics and listened to The Shadow. In high school, I became interested in fiction from that time, such as Fitzgerald, Rand and Hemingway. I grew to love the way they talked, and the way the world felt. I love pulp fiction, and I plan to read a lot more. I also really liked Dr. Jackson from Stargate because he was a total wimp. That changed the way I wrote Jonathan, to be certain.

Is this the first literary project you worked on?
The Gearheart, originally entitled “The Clockwork Girl”, was the first feature-length screenplay I wrote back in 2004. The idea for it came around in 1999, when I wanted to write a romantic comedy comic, and when I redrafted it for the movies, I tried a more dramatic bent. I’d say it worked out, because in 2007, I started the novel. Around 2008, I signed the rights to the name “The Clockwork Girl” over to Arcana Studios in exchange for a comic book deal on one of my other properties. Even though it didn’t work out in the end, Arcana was really great to me, and they continue to make a quality comic of that name.

My first novel, Festival of the Bizarre, comes out next year with Dragon Moon Press. I’ll let you know as the time approaches. 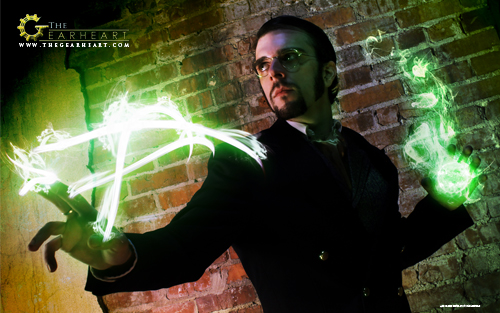 How long does it take to record an episode?
It takes about 1 hour to record. If that was the only part of the process, I’d be a happy man. It then takes another two hours to edit, and an hour to master, tag and upload the whole thing. If the episode features a new song, tack 40 hours onto that time. It’s a lot of work, and the whole series took most of my free time for the better part of a year.

Do you use a recording studio or is this basically all home-made?
I record in my office on a Sterling Audio ST-55 with a Shure preamp. A lot of the great sound comes from post processing, such as compression, parametric EQ, and my secret hero, the Noise Gate. I worked in video for a long time, so I’m pretty familiar with that stuff. Nowadays, almost anyone can produce great sounding audio, if they know a few tricks.

Where did you get the idea for the sponsors of each episode? (They are priceless)
Over the years, there have been a lot of “ol’ timey” radio commercials, and I just wanted to tap into that for something extra special. If you’d like an example from more modern media, think of Pappy O’Daniel’s Flour Hour from the movie “O Brother, Where Art Thou?”. The sponsors come from a game Renée and I play on road trips, where we try to come up with the worst commercials imaginable. It passes the time, and it gives us great material for the show. You can’t go wrong!

Is there a character in The Gearheart you are particularly fond of?
Originally, I was so in love with the idea of Cog. I like that she is a savage fighter and monstrously strong, but she also carries an air of refinement about her that marks her as a member of the aristocracy. She is quite literally the iron fist in the velvet glove. However, as I wrote the story, each and every character revealed their true natures to me, and I came to understand all of them. I think that’s what I like about character driven fiction– the things you don’t know yet are really just the things you don’t understand.

Was the story already complete when you started recording or did it grow or was it a bit of both?
I was about 250 pages into the story when I started recording, and the final draft was 550 pages. I always managed to stay about 100 pages ahead of the listeners, and I think that made for a very strong experience.

How long did it take from the idea for The Gearheart to the first episode?
Uh, eheh… Ten years?

Do you have any idea how large your fan base is?
I never thought it to be that large, but I am continually amazed. Between the two servers, have about three hundred thousand downloads of the individual episodes. I get letters, artwork and tweets constantly, and they’re all from really great people. But to answer your question, no. I’m really not sure.

The interconnections of the characters are rather complex, do you use some documentations to keep track or do you know your characters well enough, so that’s not necessary?
I occasionally had to go back and look things up, but truly, I know the story quite well. I did feel sad for some of those listening along who had caught up when I had to take breaks. I can only imagine how hard it was to keep track over the course of months.

What, if any, other works influenced The Gearheart?
Aside from the works already mentioned, I loved “The Hobbit”. Bilbo Baggins is such an incredible character because he has no gift for speech, combat or magic. Yet, in the end, he saves his entire party, and proves to be the linchpin of defense for the human lake village. I wanted a character like that.

Of course, there is also a vast body of anime and manga that influenced me when I was younger, and that helped me craft some of the combat aesthetics.

The soundtrack is excellent, who is the creative mind behind it?
I am! I composed each and every track on “The Gearheart: OST” from scratch using Ableton Live 8. For scene separators, I used a few Apple loops, but the actual score is all my composition. I also had Starla Hutchton of “The Dreamer’s Thread” contribute vocals for the tracks “Things Never Said (Reprise)” and “The Oak Tree”.

You and Renee are outstanding voice artists with quite a range of accents, timbre etc. Did you receive professional training? Did you study acting?
Neither one of us has professional acting experience. I used to be in musicals in high school and college, but I wouldn’t say that applies. Most of what we do comes from years of role playing games such as Dungeons & Dragons. I also love to mimic movie accents, and coached Renée through a lot of the scenes. To do some of those, she watched endless hours of video on YouTube.

Buskerton, Wallaby and Crust remind me a lot of Neil Gaiman’s Mr. Croup and Mr. Vandemar from Neverwhere. Are those the inspiration or where did you get the idea for this infernal trio?
I absolutely got my inspiration from Croup and Vandemar! I wanted them to be my own, but I couldn’t help but pay homage to one of the greatest writers of all time. Croup and Vandemar are a couple of toadies who happen to be effective. The essence of their frightful nature is that you expect them to be total failures, but they are seasoned killers. I thought I might take that idea and make it my own by adding a few major changes.

What other podcasts out there can you recommend?
I enjoy Selected Shorts, This American Life and The Moth. I know that’s a strange thing to say because you were probably expecting podiobooks, but those podcasts can teach you a lot about timing, vocalization and story craft. I think many podcasters would do well to learn from these masters.

And the question that surely is the most pressing: When, where and how does the story continue? When will we revisit the world of The Gearheart?
Late November, we dive back into The Gearheart (Traveler’s note: YES!) in a new novella: “Maiden Flight of the Avenger”! It will have a new soundtrack and a huge adventure set before the events of the first novel. Hopefully, I can be well into the sequel by mid-year next year! We have other products on the way, but I think I may have to keep it a secret for now…

This is definitely good news and something to look foreward to. Thank you for your time, Alex, and expect a special bulletin on this blog as soon as “The Maiden Flight of the Avenger” is out.

4 Responses to "Interview with Alex White of The Gearheart"