You are here: Home › Event › The Men That Will Be Blamed For Nothing – Kicking Cancer's butt!

It rarely happens that I am so happy to announce an upcoming concert.
Great Britain’s most famous Steampunk band (with a heavy stress on Punk) The Men That Will Be Blamed For Nothing return after vocalist Andy Heintz is making a recovery from throat cancer.

Here are the details:

THE MEN THAT WILL NOT
BE BLAMED FOR NOTHING

“genuinely inspired” – Terrorizer
“Rabble-rousing ,,, packed with droll Victoriana” – Independent on Sunday
“their timeline-defying sonics are as forward thinking as it gets” – Rock Sound
“full of silly steam punk stories that’ll make you wet your bloomers or britches” – Bizarre

Anarchic, anachronistic and truly inspired, The Men That Will Not Be Blamed For Nothing have been putting the ‘punk’ into ‘steampunk’ since 2008.  Blending tales of 1877 with the attitude of 1977, their highly original mix of horror, humour and history has seen them hailed as one of the 21st century’s most inventive acts, by critics everywhere from The Independent to Terrorizer, while their immersive, immensely fun live show has wowed crowds from Bestival to the Edinburgh Festival.  An ever-innovative recorded catalogue has included the first release on the archaic wax cylinder format for 70 years, caught the attention of EMI Records (who threatened legal action over the first album, ‘Now That’s What I Call Steampunk! Vol 1’), and seen them grow a devoted, globe-spanning fanbase, with the release of 2012’s tongue-twisting follow-up, ‘This May Be The Reason The Men That Will Not Be Blamed For Nothing Cannot Be Killed By Conventional Weapons’.

Yes, quite literally nothing can hold this truly unique band back; not lawsuits, not conventional weapons, and not even vocalist Andy Heintz receiving the damning diagnosis of throat cancer this April.  While Andy has faced up to that news, and the hell of the radiotherapy treatments that followed, his bandmates – ‘occult comedian’ and Radio 4 personality Andrew O’Neill (vocals/guitar), fellow stand-up comic Marc Burrow (bass/vocals), and ex-Lords of The New Church man Jez Miller (drums), have remained determined to keep the show on the road.  In June they played Glastonbury festival as a three-piece to a great response, before Marc and Andrew took their stand up show on a US tour The Men had been due to play, attracting rave reviews in New York, Pittsburgh, Chicago and Detroit, and playing a one-off performance as an acoustic duo at the Steampunk World Fair in New Jersey. 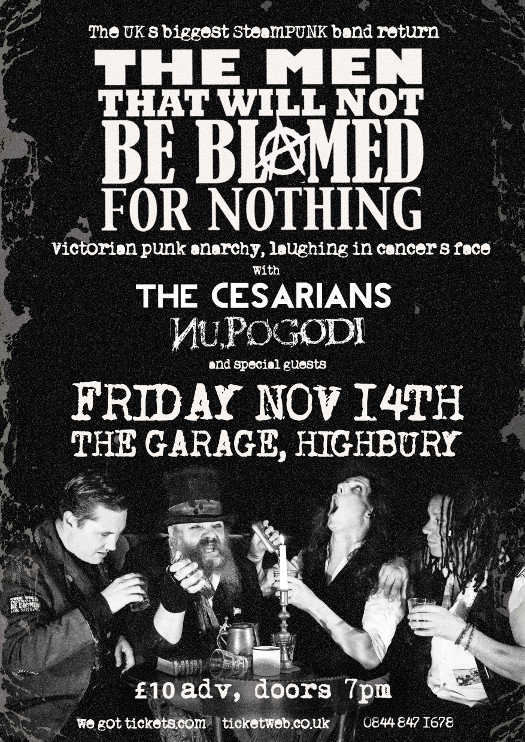 However, the most hotly-anticipated TMTWNBBFN show of the year is still to come.  With Andy now making a good recovery, the band are ready to make their big comeback as a four-piece at London’s Relentless Garage on November 14th.  Billed as a chance to join them in celebrating ‘kicking cancer’s arse’, the Garage gig will be the only their only London headline date for 2014, and will hear them debut material from the forthcoming third album, tentatively slated for release in Spring/Summer 2015.   In short, this is a night not to be missed.  Get your tickets and get down to;

This site uses Akismet to reduce spam. Learn how your comment data is processed.